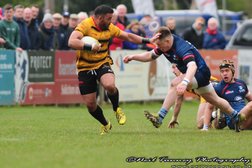 Loss at Rams finally consigns Bees to the drop

Bees bid to avoid relegation runs out of road at Rams

A spirited second half performance earned the Bees a try bonus point, but the 38-24 defeat at Rams - coupled with unfavourable results elsewhere - sealed relegation from National 2 League South at the end of the current season.

The Bees trailed 7-26 at half time against the league champions, with the points for the visitors courtesy of a penalty try. Three tries in the second half, from Zane Raimondi, Corey Venus and Dan Kelly were just reward for a better showing in the final forty minutes.

With Dings picking up 2 bonus points in their 33-36 defeat at home against Worthing, there is now - in part thanks to the five point deduction that the Bees were saddled with at the start of the season - a seven point gap between the Crusaders and the Bees, with just one game remaining.

The Bees welcome Tonbridge Juddians to Portway on Saturday 27th April KO 3pm for what will be the last game of the 2018/19 season. The boys will be keen to finish the campaign on a high note and it would be great to see as many Bees supporters there after the Easter Break. #COYB