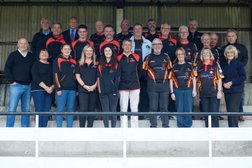 At last night’s AGM held at Portway (Tuesday 4th June), the members of Birmingham & Solihull RFC were, inter alia, updated on options for senior rugby next season following the recent announcement that B&SRFC would be transitioning to an amateur club, effective 1st July 2019.

It was confirmed at the meeting that we would withdraw from the Midlands Premier League and notice has been duly served to that effect to the League Secretary.

The club’s newly elected Head of Senior Rugby, Dr Lou Lupoli, is heading up a working group to determine the appropriate level that the club should seek to play at for the 2019/20 season. Following an overwhelmingly supportive indicative vote at the meeting, that working group was given due authority to take this forward.

As a result, the club has today applied for inclusion in the Greater Birmingham Merit League for next season. Work will continue over the summer to recruit and prepare a squad for the new season.

Any players who are interested in joining the squad as it embarks on its new path as an amateur club should contact Lou ( lou.lupoli@blueyonder.co.uk ).

Minutes of last night’s AGM will be circulated to all club members in due course.